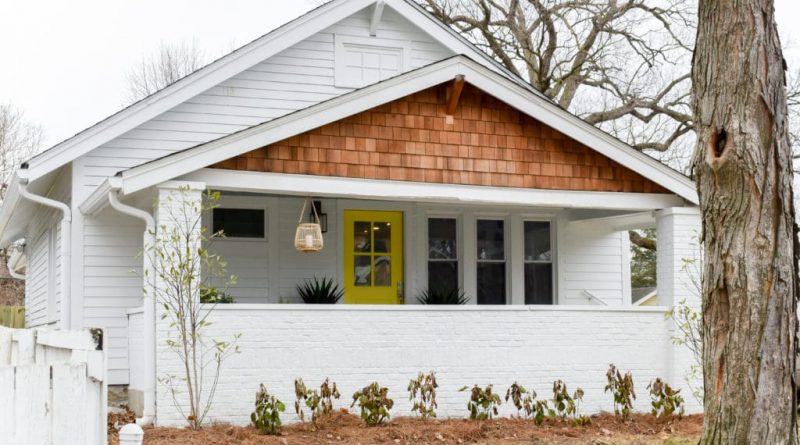 Hi, HGTV fans! Good Bones is back this week but moving to a different side of town for the first time this season. We are still the same recappers, though—Megan Fernandez, the homes editor for Indianapolis Monthly, and art director Kristin Sims.

Two Chicks and a Hammer is heading to the near-east side (specifically LaSalle and 10th streets), fertile ground for bargain rehabs. First, hosts Mina and Karen stop by the studio of one of their favorite artists, Justin Vining, who has set up shop on East 10th Street and uses the surrounding alleys to paint urban landscapes. #foreshadowing. Then it’s on to the house, which appears to be about halfway done already. Inside, the single-level bungalow is so surprisingly big that Mina calls it “Narnia.”

Kristin: They got a heck of a deal—$35,000 for a four-bedroom, 2.5-bath house—especially because so much work had already been done: demo, foundation, windows, concrete. It’s by far the best condition we’ve seen this season, maybe even in the series.

Megan: It even has a wall of “super lath,” which is a wooden-slat support wall made with bigger-than-usual slats. They are hard to rip out, and in a previous season, Karen wanted to leave the super lath and turn it into a feature wall, but wires were crossed and it was demolished first. She was so upset that she cried. Now she gets a second chance.

Kristin: This is the first time I’ve heard  of “super lath.” And as always, I was skeptical of Karen’s plan that they could make that wall look good—unfortunately, I wasn’t wowed by last week’s beam treatment.

Megan: Karen is less thrilled about the home’s “bad feng shui,” so the floor plan needs to be reworked. For one, the front door will be moved to open directly into the living space, not into a wall. For the second week in a row, they are putting the main suite at the front of the house. I prefer to be in the back of the house or upstairs, especially when the house is on a city street. It’s just a little more intimate.

Kristin: I agree, but maybe with super lath, it’s soundproof. But it is yet another house with no real dining area. Now, I’m not foolish enough to think that people eat at a dining table every night, but I do think that the trend is to entertain more than in the past decade. And in a four-bedroom house, I would rather have more living space.

Megan: I see what you mean. There’s already a buyer, and he appears to be single, so why does he need four bedrooms? But Tad might be moving in because he loses his phone in a massive pile of debris during demo and isn’t leaving without it. It fell out of his pocket while he was ripping out a ceiling. Cory calls Tad’s number, hoping the phone will ring inside the mountain of insulation and dirt, but no dice. But Tad isn’t worried. He believes the universe will bring it back to him. Do you have faith?

The kitchen on Good Bones “New Babies and New. Neighborhoods”Photo courtesy Two Chicks and a Hammer

Kristin: What’s weird was that before, when he climbed the steps on the porch and Mina mentioned his jorts, I specifically noticed his phone in his back pocket and thought, Geez, no one can be without their phone anymore. So yes, I have faith in a universe that says, “It’s OK, put it down, enjoy the space, breathe, talk to people, look them in the eye. You don’t need to be accessible 24/7.”

Megan: One thing we know is that the universe forced Tad to do some cleanup, which sounds like a first.

Kristin: It’s ridiculous that Tad doesn’t clean up. It’s like the kid who dumps Legos all over the house and then moves on to Hot Wheels.

Megan: You can tell we aren’t moms. We have no patience for the slightest mess. So while Tad is shoveling through the debris, that leaves Cory to demo the chimney outside. It’s well established on Good Bones that Cory is afraid of heights. He wears a harness yet still immediately freaks out.

Kristin: Why would he go up on the roof in those boots? He struggled to get a grip on the climb and ponders why he couldn’t get traction.

Kristin: I’m sure he didn’t learn a thing. Maybe he needs a fanny pack.

Megan: He needs a bop upside the head—when he finishes the chimney demo for Cory, he flings bricks and other chunks of stuff toward the dumpster and takes out some gutter instead. Mina even begged him to stop, but he did it anyway. I want to give him the benefit of the doubt and think he’s trying to make entertaining TV.

Kristin: No, no, supposedly this is just “documenting the real stuff!” Tad throwing chunks of chimney from the peak is just too much. I’d like to think it’s wearing on Mina, too. Especially since each week seems to result in expensive and unnecessary damage.

Megan: They always have enough to deal with anyway, even though Good Bones doesn’t milk construction snafus for drama. Case in point: The back wall of the house is falling down, so the crew has to do some crazy rigging with chains to keep it upright. Mina comes by to assess the progress and says she only has about two weeks until baby Charlie is due. But Tad is evidently a natural OB/GYN because he predicts that the baby will come a lot sooner. Two days later, Mina is in the delivery room. Then we get to see little Jack, her son, meet his newborn sister for the first time on home-video footage.

Kristin: Best part of the episode!

Megan: Well, in TV land, Mina has the baby, introduces her to Jack, recovers, and gets back to work in exactly 57 seconds. I timed it.

Kristin: I loved that you timed it! I did notice that there was no downtime in Chickland. Maybe in real life, Charlotte is now driving and Jack is in college.

Megan: Jack can replace the drywallers, who covered up Karen’s super lath wall! Not again! Psych, they’re going to take it back down.

Kristin: I hope they don’t have to pay for all of these mistakes week after week. But maybe it’s their own crew.

Kristin: I am so happy that there is no weird theme this week. But I am scared of the serious collar. MJ is designing a coffee table. When he starts drawing, are you transported back to the kitchen island from last week? It’s also to be built from one piece of wood. Also bi-level. Also live edge. Also by our favorite Iron Timber guys. MJ is so lucky; design it and they will build.

Megan: I didn’t make the connection to last week’s island and this week’s table. I was too distracted by the little grilled cheese sandwich that MJ doodled on the sketch. I was dreaming of buttery, crusty bread. But soon the design comes together and snaps me out of it. Karen’s treatment on the super lath is to polyurethane it to a honeyed mahogany color and add wooden picture frames in the same tone. Like it?

Kristin: I do! I would have liked the edges to be a little more trimmed out, but I love the wall! Yeah, Karen!

Megan: They also use picket-fence marble tile in the bathroom shower. What do you think?

Kristin: Clean and simple. A nice change from the subway tile that everyone uses. I am surprised, however, that they tile the front lip of the shower but pair it with a shower curtain instead of a door.

Megan: I would want a glass door with the walk-in shower. Maybe it hadn’t arrived yet.

Kristin: It’s an easy upgrade for the homeowner.

Megan: The picket-fence tile is also used on the backsplash, in a smaller scale. Do you think buyers notice these kind of “tie-ins”?

Kristin: I think so, even if they don’t actually realize it. It gives the viewer or homeowner continuity and perhaps a comfort that they might not be able to exactly put their finger on, but they know it’s there.

Megan: Not so subtle is the artwork competition that MJ and Mina come up with. She loves a good competition. They want to give the homeowner a painting of the house in Justin Vining’s style, so they set up easels in the yard and have all the cast members give it a try. For some reason, they even bring in Kyle Ragsdale, a noted local artist, to emphasize how bad the amateurs are. Justin paints one, too. They all vote on their favorite to go into the house, and Mina wins, despite the fact that Karen was wearing a beret.

Kristin: Mina should get extra points for painting with a baby strapped to her. They all are better than I thought they’d be, but Justin’s is my fave.

Megan: Justin’s and Kyle’s are clearly superior, but surprise—MJ and his heart of gold use small versions of all the paintings to create a gallery wall inside the house. The house looks great on a walk-through, with wood accents and woven basket–style light fixtures adding warmth to the industrial quality of the super lath and the concrete-esque quartz countertop. It’s a nice place. Hey, did you notice that during the first commercial break, the little girl in the Eggo commercial was named Indy?

Kristin: No, but I noticed that Mina mentioned Narnia four times during the episode.

Megan: That’s on the editors.

Kristin: And the cameras caught a glimpse of Audrey’s Place Furniture down the street from this house. It’s one of Indy’s best spots to find hidden gems. I know the homeowner has his own store (Foundry 317 in Broad Ripple), but he should sneak a peek once in a while.

Megan: I still want a grilled cheese. How do you make yours?

Kristin: The secret to the best grilled cheese includes pepper jack for some heat, American for some ooze, tomato for freshness, raw onion for kick, bacon because it’s bacon, all schmooshed between sturdy bakery bread. But it’s a secret. Don’t tell.

Why I have given up on doing housework